Globally, offshore drilling activity continued to slip in week 29 of 2020, with the number of jackup rigs dropping by one to 322 and floaters by one to 105, according to energy analyst Westwood Global Energy Group. While the floater count held steady in West Africa at five for the fourth consecutive week, developments in the region appear to signal weakening activity.

Normally the West African market for OSVs constitutes some 10 countries, with Nigeria and Angola the most prominent for their size and importance for the actors in the industry. These two countries produce about half of the oil in the region. There are about 65 offshore production systems in the area and there is normally healthy activity for what concerns exploration, too.

As a result of the onset of Covid-19 and the crash in oil prices, we have witnessed an almost complete collapse of the market. In Nigeria, 40+ OSVs have left and at present there are approximately 80 vessels idling in or around Port Harcourt. At the time of writing only two companies are active in exploration, each with one rig.

It appears as if the appetite for the oil majors to keep investing in West Africa has been waning in recent years and rumours persist that one or more of these are considering pulling out entirely. 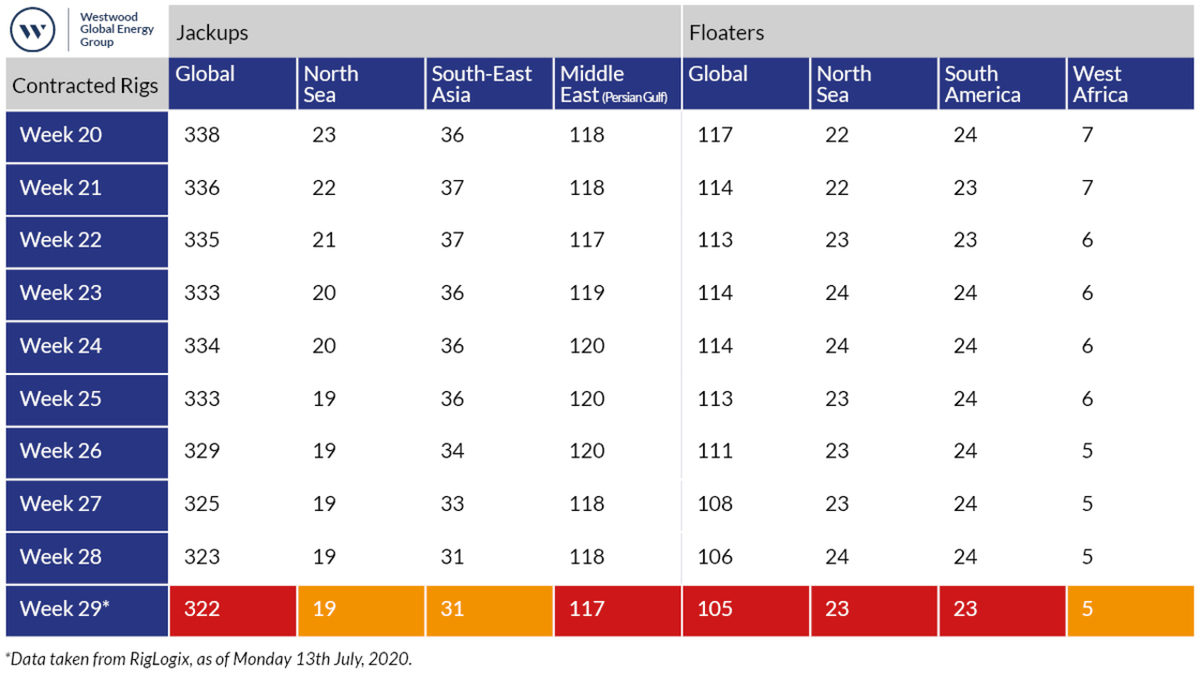 In the Nigerian context, the signing, in November 2019, of the Deep Offshore and Inland Basin Production Sharing Contract Act did not add any increased incentive for further investments from the oil majors. While the aim of the government seemed to be to increase revenues in the short term, the decision put the brakes on a number of projects from the oil majors due to the revision of the cost base.

Exploration has come to an almost complete standstill, with only Shell continuing its activities with the Borr jack-up Frigg. This contract is expected to come to an end by December, with no additional contracts in the pipeline.

ExxonMobil has cancelled the contract for the Trident XIV jack-up rig that was slated to work until February 2021. Additionally, ExxonMobil has early terminated two other jack-ups. The challenges in Nigeria do not end with the lack of appetite for further exploration. From local sources, we hear that the total production in Nigeria will be around 1.7 mbpd against an original forecast of 2.18 mbpd.

In the OSV segment, the collapse has had dire consequences, resulting in the laying up of vessels and lower day rates for the vessels still in operation. Across the line, and with government backing, a draconian reduction in cost of 40% was imposed in the Nigerian offshore support vessel market. The demand mirrors the request from the last oil crisis in 2014-15. However, the rate levels have still not recovered from the last crisis, with average mid-size platform supply vessel rates of approximately US$13,000 per day. A 40% hit on such rates means the vessel owners are operating dangerously close to their DRC. This means that commercial considerations among OSV operators are often to choose between the market day rate and the cost of having their vessels laid up. There are indeed considerable costs to be saved in lay-up, but there are repercussions; when tendering, oil majors are increasingly disqualifying vessels that have been in lay-up.

Sources from oil companies highlight the challenge in West Africa quite well when they state that “first we need the oil price back up, then we need it to stabilise, then we will invest in other areas globally and once this is done, only then will we start considering investments in West Africa”.

Members of OPEC+ are expected to meet this week to discuss the loosening of production cuts as oil demand has begun to increase with the easing of Covid-19 lockdowns. Brent crude is trading about US$42 per barrel, down about 30% for the year.